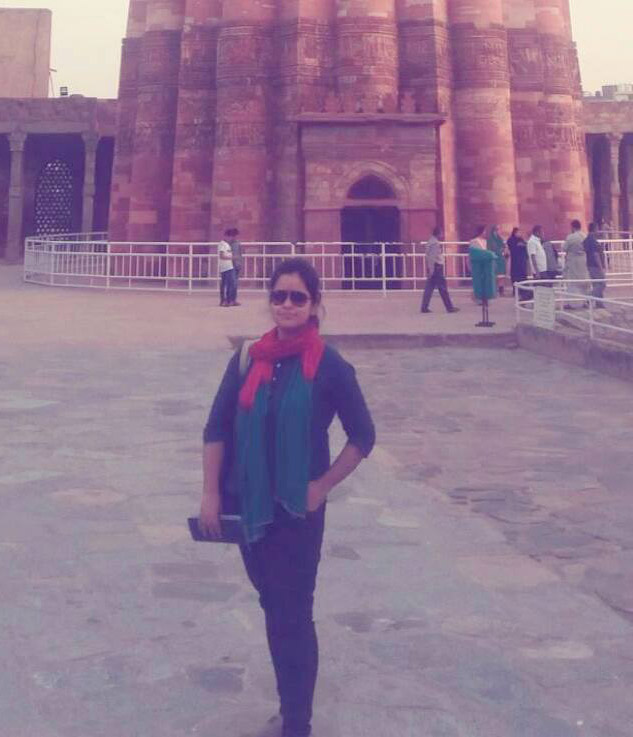 Renewable Energy Industry in India – A Path towards Sustainability

India, the 2nd largest populated country and one of the exceptional performers of the global economy has witnessed significant growth in the recent years. However, with the expanding economic activities, the growing energy demand of this nation is mostly met by the conventional or non-renewable energy sources like coal, oil, natural gas etc. This practice of the Indian economy has degraded its environmental condition, caused the scarcity of natural resources and increased the financial burden.

For the transformation of the economy to a sustainable one, it is important to aim for a green economy by significantly reducing the pollution level. This is why promoting the concept, generation and usage of renewable energy in India has achieved massive importance in the recent years. Multiple initiatives, government policies and investments etc. have made India one of the attractive renewable energy markets in the world. The expansion of the renewable energy industry in the country will strengthen the energy security, control the climate risk, ensure accessibility of affordable energy to all and help to achieve sustainable economic development.

The article attempts to study the reasons behind the growing need of renewable energy in Indian economy, explores the ways through which the non-conventional energy sources will benefit the country in the long run. It also reveals the energy landscape in India, the efforts and initiatives which are being taken to encourage the growth of the renewable energy industry in the country, the challenges which are faced while the expansion of renewable energy projects and suggests way-outs for achieving a better growth path for the industry.

The renewable energy depicts as the green energy where the energy is extracted from the sources like sunlight, wind, water which are considered to be abundant or endless. The growing level of environmental pollution, increasing temperature, rising number of natural calamities and many more events of natural disasters demand the greater use of sustainable energy which can meet the energy need of any economy without depleting the natural resources like coal, natural gas or oil etc.

A Glimpse of the Global Energy Sector

Between 2010 to 2020, the energy consumption level had increased the most in Asia Pacific. The share of this region in the overall global energy consumption increased from 38.89% to 45.5% while the European region witnessed the maximum fall (from 17.53% to 13.86%) for the same during the mentioned time period (Chart -3). Besides, countries from the Asia-pacific region also occupied the majority positions in the top 5 energy consuming countries in the world in 2020 (Chart – 4).

Key Features of the Global Energy Sector in the Recent Years

The Status of the Indian Energy Sector

India, the 2nd largest populated country is also the 3rd largest energy consumer in the world. This exceptional performer of the global economy has witnessed remarkable growth in various spheres. Between 2010 to 2020, the nominal GDP of India had increased at the CAGR of 4.72%. The share of India in the global GDP also increased from 2.58% to 3.2% between 2010 to 2020.

Hence, the energy demand of such rapidly growing economy is really huge. Growing population, rapid industrialisation, expanding infrastructural operations, widespread agricultural activities, technological upgradation in various sectors, rising rate of urbanisation, greater accessibility of electrification in the rural and remote areas etc. are some of the crucial reasons for exorbitant energy demand in the country. These all things make the growth of the Indian energy sector really promising. 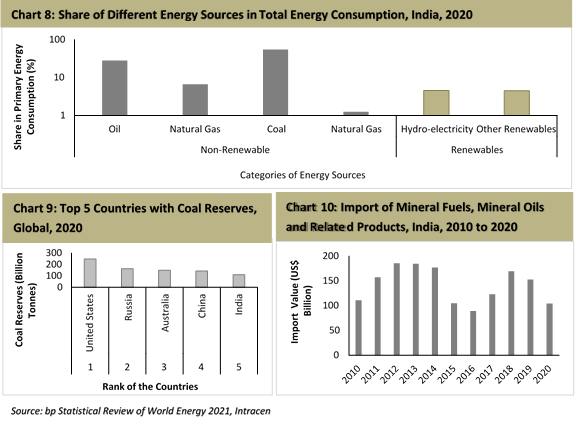 Key Findings of the Energy Usage Pattern in India

After witnessing such hazardous impacts, have there been any kinds of initiatives to encourage the usage of renewable energy sources in India?

Some of the initiatives in India to achieve short- and long-term climate goals are as follows:

With the launch of such types of initiatives, has the energy usage pattern in India changed? What is the status of renewable energy Industry in India? 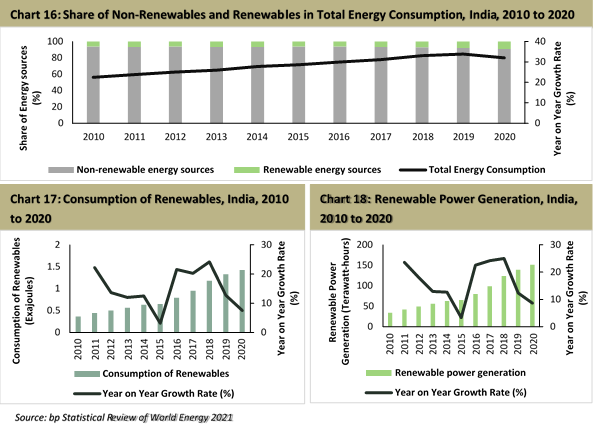 Glimpse of the Renewable Energy Infrastructure 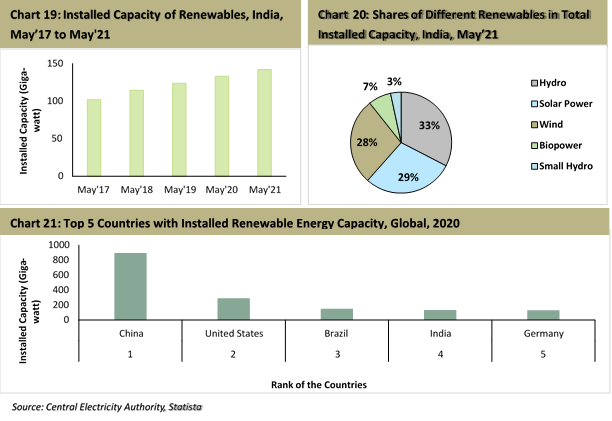 The Indian economy is on a verge to be a $5 trillion economy by 2024-25. The rapid economic growth in the recent years has benefitted the nation in various ways. However, the degrading environmental performance has also affected the country during this period.

According to “Environmental Performance Index” prepared by Yale University and Columbia University in collaboration with the World Economic Forum, India ranked 168 out of 180 countries in terms of overall environmental quality in 2020. This lower rank of the country can only be improved by reducing the Greenhouse gas emission, cleaning up the air and making significant efforts to conserve the biodiversity. Hence, the biggest challenge of the Indian economy would be to plan strategies to achieve economic growth by adopting a green perspective and implementing environment-friendly initiatives. By promoting the sustainable growth, India will be able to achieve the ambitious goal without compromising the ecology of the country.

1) Availability of the renewable energy sources- The renewable energy sources like strong winds, sunlight, fast-moving water etc. are considered to be abundant. Most parts of India, receive huge amount of solar radiation. The country receives around 5,000 TWh of solar insolation every year. If it can be utilized with proper strategies, it can address the entire energy deficit problem in the country. According to National Institute of Wind Energy (NIWE), the total wind energy potential is 302 GW at a 100-meter hub height in India. India is blessed with a coastline of about 7600 km surrounded by water on three sides and has good prospects of harnessing offshore wind energy and tidal energy. Moreover, with an enlarged river system, India has an estimated hydropower potential of 1,45,320 MW, excluding small hydro projects (SHPs). Hence, if India starts generating power by renewable energy sources, then it will not have to depend on other countries, and energy imports will also reduce.

2) Lower Tariff Rate – Renewable energy is accessible at affordable rate electricity across the country and can help stabilize energy prices in the future. In 2020, the solar tariff in India roamed between INR 2/kWh to 3/kWh (US$ 0.027/kWh to 0.040/kWh)

3) Low Carbon Emission – The carbon emission for using renewable energy sources is much lesser than using fossil fuels. Coal emits between 1.4 and 3.6 pounds of CO2e/kWh. Wind, on the other hand, is responsible for only 0.02 to 0.04 pounds of CO2e/kWh on a life-cycle basis; solar 0.07 to 0.2; geothermal 0.1 to 0.2; and hydroelectric between 0.1 and 0.5.Even when including “life cycle” emissions of clean energy (ie, the emissions from each stage of a technology’s life—manufacturing, installation, operation, decommissioning), the global warming emissions associated with renewable energy are minimal. Hence, increasing supply of renewable energy will help to reduce carbon emissions in India.

4) Economy growth and Greater Investment – Greater usage of renewable energy will have a positive effect in the economic growth of the country. With the government’s aspiring targets for the green energy sector, India has become very attractive from investors’ point of view, both domestic and foreign, and would continue to generate more investment in the future, resulting boosting the economic performance of the country. Between April 2000 to March 2021, the non-conventional energy sector in India received US$ 10,022.72 Million.

7) Addressing the energy deficit – Though between March’11 to March’21, the power deficit in the country had reduced at the CAGR of 34.83%, still a significant areas of India are suffered from power deficit each year where the demand is not met by the power produced from coal and other types of non-renewable energy sources.  Hence, in such cases, production of power from renewable energy sources will help to fill that demand-supply gap and boost electrification in rural and remote areas by increasing the power supply in the economy.

What are the things which are hindering the proper growth of the renewable energy industry in India?

Some of the obstacles for the growth of renewable energy sector in India as follows:

How can the situation be recovered?

The energy landscape of India is really versatile. With the presence of different categories of energy sources, the country is capable to operate large scale of energy generation programme. However, the complete dependence on the fossil fuels for decades has severely affected the environment in the economy. Hence, initiating the usage of renewable energy also became crucial.

Based on the present status of the Indian Renewable energy industry, it can be said that India has a sound infrastructure for renewable energy. The overall infrastructure, investment, generation and consumption of the renewables in the country make us hopeful for a promising future. The country has witnessed the impacts of being dependent on the conventional energy sources (non-renewables), but with time, the transformation in the energy usage pattern has also been noticed. The growth in the consumption or production of renewables has also been significant in the recent time. The installed capacity of the renewables has witnessed impressive growth in the last few years. In a few cases, the expansion of the renewable projects seems to surpass the thermal projects in India. Multiple government policies and investment programmes have also broaden the growth of renewable energy industry in India. Under such situations, it is important to improve the transmission system and distribute the generated power at affordable rates to all the required places, especially in the rural and remote parts of the country.

Along with such progress, several issues have also been detected during the time of implementing the projects which tried to hinder the growth and keeps it reminding that the country has to work more strategically to achieve the desired target.

In 2020, just like the global sector, the Indian energy demand got affected after the beginning of partial and complete lockdown in many nations to mitigate the spread of the COVID-19 pandemic. The prolonged restrictions in the movement affected the energy demand in the national and international level massively. However, with the reopening of economies things also started to get revived. This is being expected that the stimulus packages and vaccination programmes in India and other nations might help to recover the situation to a greater extent. The vaccination has started almost in every part of the world and the process has also got completed in many nations. Still the trend of disruption is continuing in the various parts of the world as the virus is appearing with its more infectious variants after every few months.

However, addressing all such factors with appropriate execution of suitable norms and maintenance of them in the long run can be helpful. With the rising concerns of the government and citizens to control the environmental pollution it can be expected that India will surely be able to achieve sustainable development in the coming days.

Assessment of climate change over the Indian region: A report of the Ministry of Earth Sciences (MoES), Government of India. https://reliefweb.int/report/india/assessment-climate-change-over-indian-region-report-ministry-earth-sciences-moes

India plans to produce 175 GW of renewable energy by 2022. https://sustainabledevelopment.un.org/partnership/?p=34566

How embracing renewable energy can help India achieve its target of becoming a $5 trillion economy by 2024-25. https://economictimes.indiatimes.com/small-biz/productline/power-generation/how-embracing-renewable-energy-can-help-india-achieve-its-target-of-becoming-a-5-trillion-economy-by-2024-25/articleshow/74668710.cms?from=mdr

Is India on track to meet its Paris commitments. https://www.downtoearth.org.in/blog/climate-change/is-india-on-track-to-meet-its-paris-commitments-67345

The Reliable And Resilient Power Of Renewable Energy. https://uswindinc.com/reliable-resilient-power-renewable-energy/

India has some huge renewable energy goals. But can they be achieved?https://www.cnbc.com/2020/03/03/india-has-some-huge-renewable-energy-goals-but-can-they-be-achieved.html